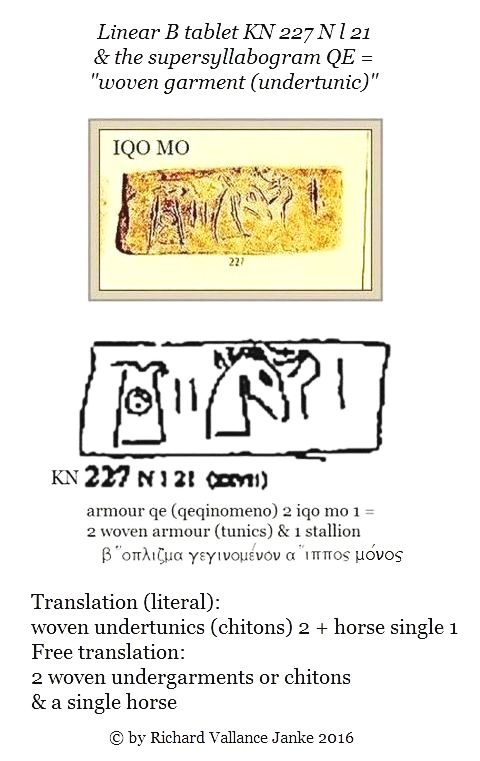 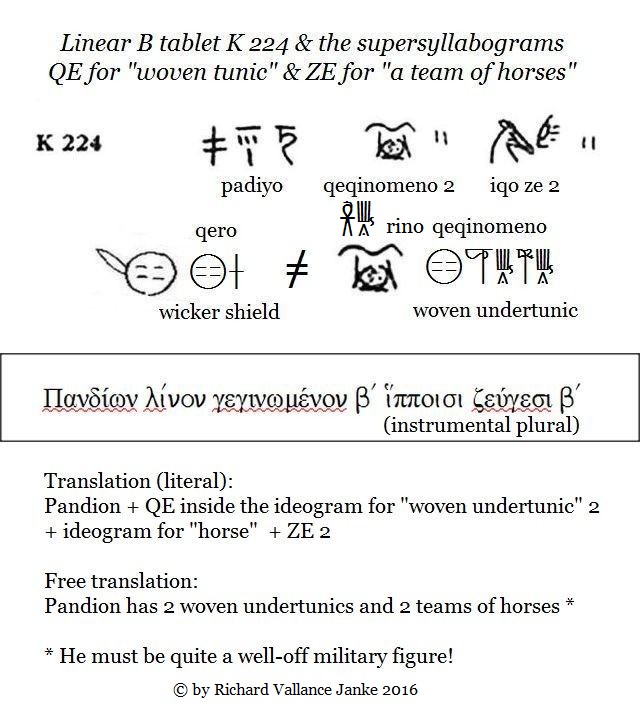 This tablet poses the same problems as the previous ones we have posted on these two supersyllabograms, RA & QE. First off, as I have already said, it is well nigh impossible for me to determine what the two syllabograms WE WE following the second instance of the supersyllabogram QE for “wicker shield” mean? As I pointed out in the previous post, the double occurrence of WE (WE WE) usually references measurement. But I am unable to harmonize their incidence in this context with terms of measurement. Apart from that, there are two other glitches in the decipherment. What does rawa following the first instance of QE = “wicker shield” refer to. The word rawaketa = “leader of the host” or “commander in chief” where “host” = “army”, as we find in Homer as well, is extant on the Linear B tablets. I have derived the subset rawa = “host” from the latter. It may or may not be the correct interpretation in this context. Secondly, if the last syllabogram, truncated right, on the first line is in fact DU, then it may be the first syllable of the word duo = “two”. But this is entirely conjectural. Although the rest of the translation appears to be relatively straightforward, it is still open to question, especially in light of the fact that I am quite unable to decipher WE WE.

Next, we find the supersyllabogram QE inside an ideogram which looks vaguely like a shield. And that is what I think it is meant to be. QE indicates that not only is this a shield, but a wicker shield = qero. This supersyllabogram has never been deciphered before,  This is followed by the ideogram for “horn”, hence my translation. There is no known ancient Greek word corresponding to the Linear B “numoro”, which is almost certainly left-truncated at any rate.

There are no fewer than 6 more Linear B tablets with both of these supersyllabograms.