A few months ago I posted my first interpretation of Linear A tablet HT 10 (Haghia Triada). Since then, I have made a few small tweaks. These are (a) the Linear A word kunisu, which is derived from Semitic kunissu, definitely means “emmer wheat”. (b) The supersyllabogram PA stands for Linear A pa3ni (paini) (noun)/pa3nina (painina) (adjective), which means either “millet” or “spelt”, since these two grain crops are the second most common grains cultivated everywhere in the Bronze age after kunisu “emmer wheat” and didero “einkorn wheat”. (c) the translation “offscourings/chaff” for ruma/rumata/rumatase (noun, adjective, noun in the instrumental plural) makes sense in context. (d) dare probably means “with a firebrand or torch”, since the tablet appears to deal with drought, when dead crops, i.e. grains in this case, are burnt. (e) Although tanati resembles the dative singular of the ancient Greek work qa/natoj, but this interpretation is doubtful.

Linear A haiku: a fawn living in the fields 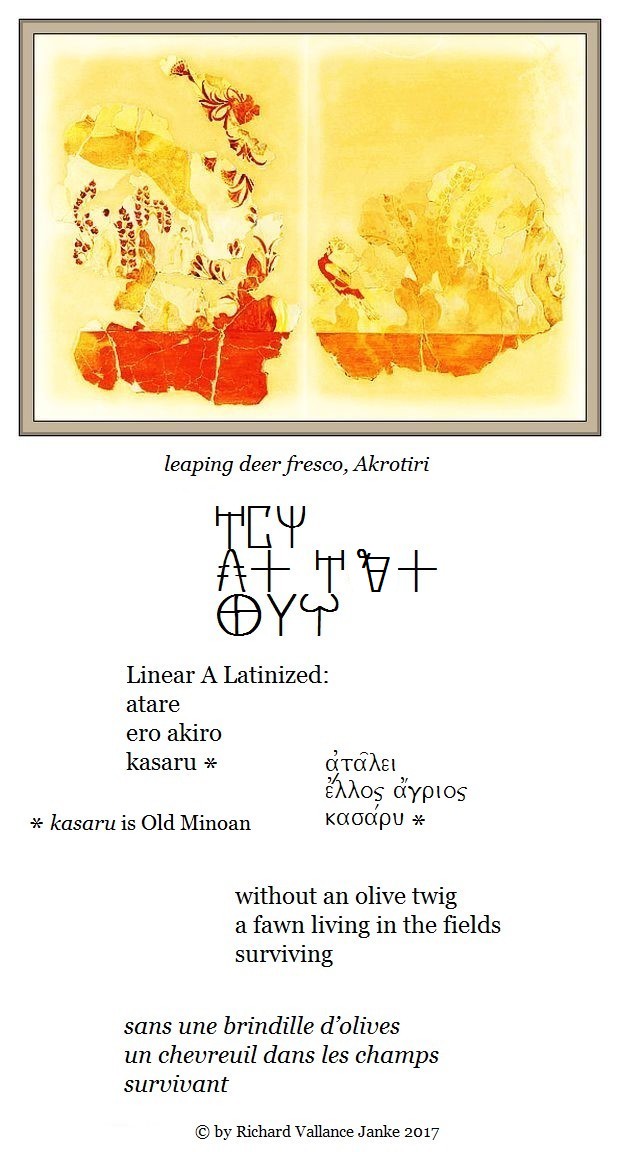 This haiku is entirely in Mycenaean-derived New Minoan (NM1), except for the word kasaru, which is Old Minoan, and apparently means “surviving (drought), at least from context on the tablet on which it appears (Haghia Triada HT 10). I have transcribed it into ancient Greek so that it fits with the rest of the haiku.