Linear B numerals 100, 1k and 10k are atemporal, like those in the movie. Arrival:

It is quite clear from the following illustration of the numbers 1-12 in the Heptapod circular language, which correspond to the number of ships landing on earth, that their numbers, occurring in a circle, are similar to the numerals for 100, 1k and 10k in Mycenaean Linear A. This correspondence reveals an intriguing characteristic of these Linear B numerals, namely, that they can serve as ideograms for extraterrestrial communication. In other words, just as the Heptapod numbers serve to communicate from the extraterrestrials, the Linear B numerals can serve to communicate with them or any other extraterrestrial civilization. 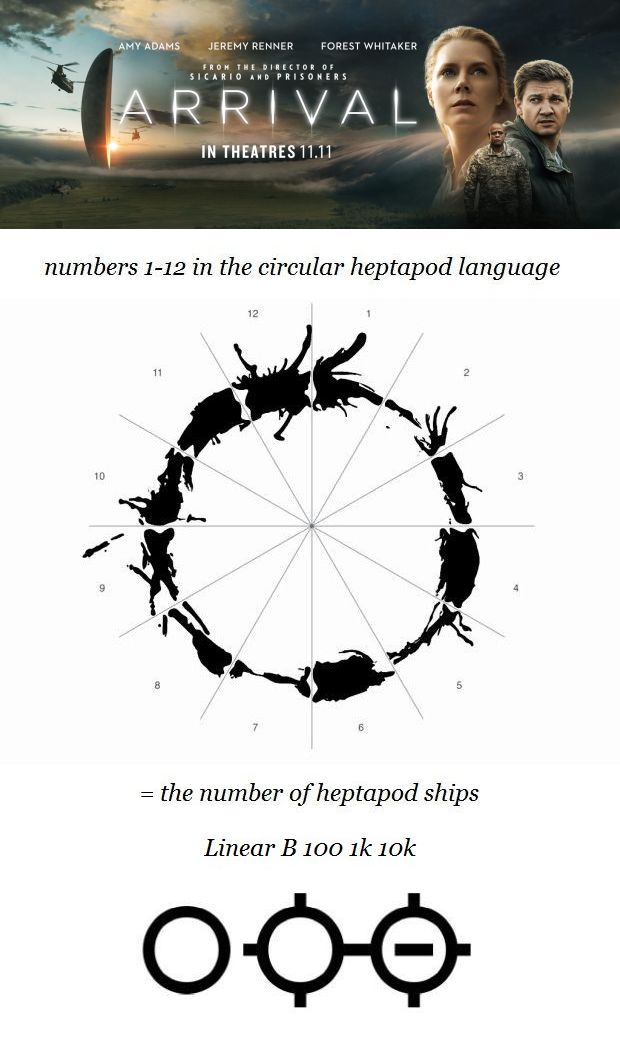 Sir Arthur Evans‘ successful decipherment of the Numeric Accounting System in Linear B (Click to ENLARGE): 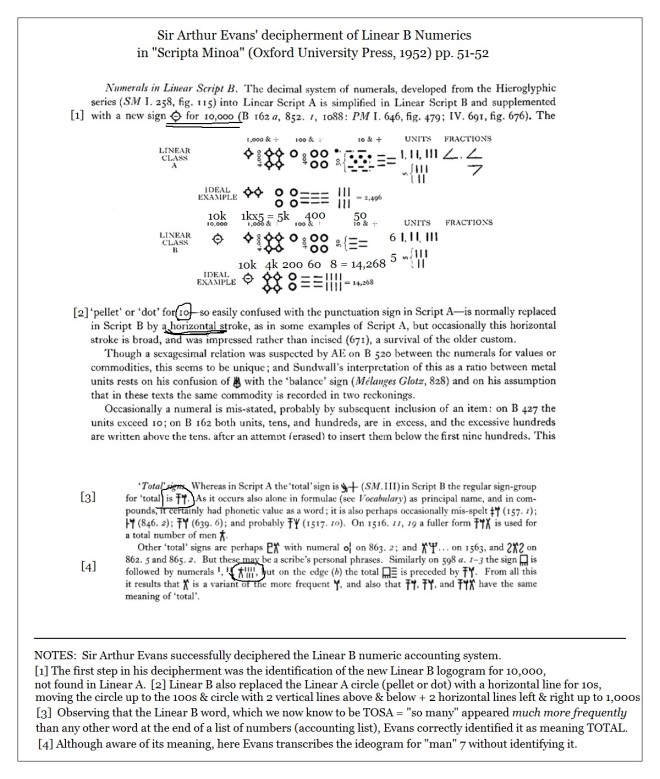 as published in Scripta Minoa (Oxford University Press, 1952), the very same year that Michael Ventris finally deciphered the entire Linear B syllabary as well as a large number of its ideograms. Sir Arthur Evans had, of course, deciphered the numeric system years before.

Explanation of the Table of Numerics:

The Principle of Derivation [D] as applied to the reconstruction of the orthography of numerics in Linear B. Even though there are very few attested [A] examples of numbers spelled out on Linear B tablets, I believe that we can safely derive them with a considerable degree of confidence, if we strictly apply the spelling or orthographic conventions of Linear B, which are available online here:

[1] These numbers are all spelled identically in Linear B and in ancient alphabetic Greek.

[2] The linear B number QETORO [4] is obviously a variant of the Latin “quattro”. There is nothing unusual whatsoever about the parallelism between Linear B & Latin orthography, since linguistically speaking, Q or QU are interchangeable with T.  First, we have the spellings of 4 in Greek (te/ssarej te/ttarej).  Though it will come as a surprise to many of you that the Linear B spelling for 4 QETORO would eventually morph into (te/ssarej te/ttarej) in ancient Greek & then back to “quattro” in Latin, there is a perfectly logical explanation for this phenomenon. This is why you see a ? to the left of the Greek for 4, because it is all too easy to fall into the trap of erroneously concluding that Linear B QETORO cannot have been a ancestor of the ancient Greek spellings for 4, when in fact it is. In order to put this all into proper perspective, Latin spells 4 as “quattro” for the simple reason that “tattro” would simply not do. All this boils down to a single common denominator, the principle of euphonics, meaning the alteration of speech sounds, hence orthography, such that any word in any language sounds pleasing to the ear to native speakers of that language (not to non-speakers, i.e. anyone who cannot speak the language in question). Every language has its own elemental principles of euphony, but some languages place far more stress on it than others. Greek is notorious for insisting on euphony at all times.

? The masculine for the number 1 is missing for the exact same reason that the 2nd. person singular is missing from my paradigm for the present tense of Linear B verbs. I find it impossible to accurately reconstruct any Greek word ending in eij for the simple reason that it not possible for any word to end in a consonant in Linear B. So why bother? This handicap will return to haunt us over and over in the Regressive reconstruction of all the conjugations and declensions and parts of speech in Linear B Progressive grammar, leaving gaping holes all over the place.

Orthography of Numerics In Linear B:

At a glance, we can instantly see that the spelling of several numerals in Linear B is identical to that of their later Greek alphabetic counterparts, with the exception of marking initial aspirates & non-aspirates, which Linear B was unable to express with just one exception, the homophone for HA. This speaks volumes to the uniformity of the spelling of numerics over vast expanses of time, as in this case, from ca. 1450 BCE (Linear B) – ca. 100 AD and well beyond. In fact, some numbers are still spelled exactly the same way in modern Greek, meaning that the orthography of the Greek numeric system has remained virtually intact for over 3,400 years!

Since the Mycenaeans used Linear B primarily for accounting, agricultural, manufacturing & economic purposes, they almost never spelled out numbers, for the obvious reason that they needed to save space on tablets that were small, because they were baked, hence fragile, and not only that, destroyed at the end of every “fiscal” year, to make room for the following year’s statistics. Their habitual use of logograms for numbers was in fact, (a type of) shorthand. Keep this in mind, because Linear B makes use of shorthand for various annotative purposes – not just for numerals. This is hardly surprising, considering that the tablets were used almost exclusively for accounting. So if we think shorthand is a modern invention, we are sorely mistaken. The Mycenaeans & Minoans were extremely adept in the liberal use of shorthand to cram as much information, or if you like, data on what were, after all, small tablets. But there is more: every extant single tablet is a record of the agricultural, manufacturing & economic activities for one single year. It also means that there is no way for us to know which, if any, of the tablets from one site, for instance, Knossos, where the vast majority of tablets have been found, represent accounting statistics for exactly the same year as any of the others. So we have to be extremely careful in interpreting the discrepancies in the quasi-chronology and even reverse-chronology of the data found on the tablets. There are several other reasons why we need to exercise extreme caution in interpreting the data on extant tablets, but since these are of a different nature, I shall not address them here.

A Linear B Tablet listing 50 swords (CLICK to enlarge):

This small Linear B tablet clearly illustrates the accounting system adopted for Linear B. Once again, we see an Ideogram, which is tagged with an asterisk (*).  It may seem rather odd that on this particular tablet the scribe actually supplemented the word for sword, “pakana” with its ideogram, which sounds counter-intuitive, given what I just said in the last post, that the whole idea of the Linear B accounting system was to save space on the tablets, not waste it. But in fact, such is not the case. The explanation is simple: in this particular case, the scribe is making certain that no one mistakes what he is counting, by not only writing out the word but also inscribing its ideogram right beside it.  It’s almost as if he were self-auditing. This makes the Linear B accounting system even more coherent and consistent than it might otherwise have been. We will see that this practice of writing the word for the total number of items accounted for + its ideogram recurs frequently in Linear B tablets. However, the downside of this is that some Linear B scribes were apparently either lazy or in a rush or simply felt that the ideogram alone more than sufficed in tabulating accounting lists. Thus, on some (but far from all) Linear B tablets, accounting lists give only the ideograms for the items in the list(s), which means that unfortunately for us, we have to learn all the major ideograms if we are to be in a position to decipher all the accounting records.  We cannot count on finding both the words and the ideograms for each item being listed in all Linear B tablets.