An Analysis of the Archaic Greek in the Iliad: Book II (Lines 1-34) [Click to ENLARGE]: 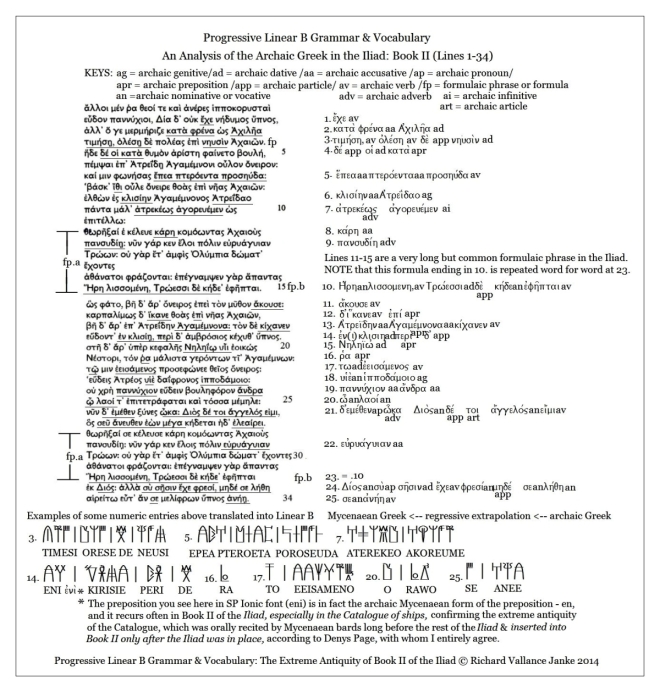 This post takes the text of the first 34 lines of Book II of the Iliad, which appear in the previous post with my translation into English, and extrapolates from that text most of the archaic Greek grammar and vocabulary which appear in it. And there is quite a lot. For instance, the archaic Mycenaean genitive appears in line 18 (i9ppoda/moio Linear B IQODAMOYO), dative in line 3. (nhusi\n Linear B NEUSI) and accusative in line 19. (pannu/xion… …a1ndra Linear B PANUKIO… ….ADARA), to cite just 3 examples in the first 34 lines alone. Archaic forms of all parts of speech are found throughout Book II of the Iliad, but they occur far more frequently in the Catalogue of Ships (Lines 484-789) than anywhere else. The significance of this cannot be overestimated. The liberal use of archaic Greek grammar and vocabulary, above all in the Catalogue of Ships, provides extremely strong circumstantial evidence that Catalogue of Ships is of Mycenaean origin, and was recited by Mycenaean bards, not as myth but as historical fact. Apparently, the Trojan War did in fact occur around 1200 BCE. It is my belief that the Trojan War, although it culminated in victory for the Greeks, was in fact a Pyrrhic victory, because it completely exhausted the military and naval resources of Mycenae and its subject cities (Pylos, Tiryns, Orchomenos, Thebes & Athens),

resulting in the inevitable utter destruction of Mycenae and all its satellite cities, which were no longer able to defend themselves against the invasion of the barbaric Dorian hordes. It strikes me as singularly strange that this entirely plausible explanation for the destruction of Mycenaean civilization is almost never mentioned in historical literature of early ancient Greece.