Brian Wyble’s carved facsimile of Linear B tablet KN 349 J b 12. He made this himself. Amazing!

Rukito apudosi + ideogram for “olive oil” 52+ (because it is right

Brian is our newest student of Linear B. He already has a fundamental understanding of ancient Greek, although I am sure he realizes from the archaic Greek text above that he needs to master archaic Greek. This should come to him in no time flat.

Welcome from all of us to the study of Linear B, Brian!

Haiku in Minoan Linear A: violets in fine craftsmanship from her father:

In our previous post, I stated that I had never seen any occurrence of the supersyllabogram WI incharged in the ideogram for “hide”. Immediately after, I discovered not one, but two, examples of this supersyllabogram (WI), one on tablet Knossos KN 797 T e 01

& the second on a multi-image illustration, 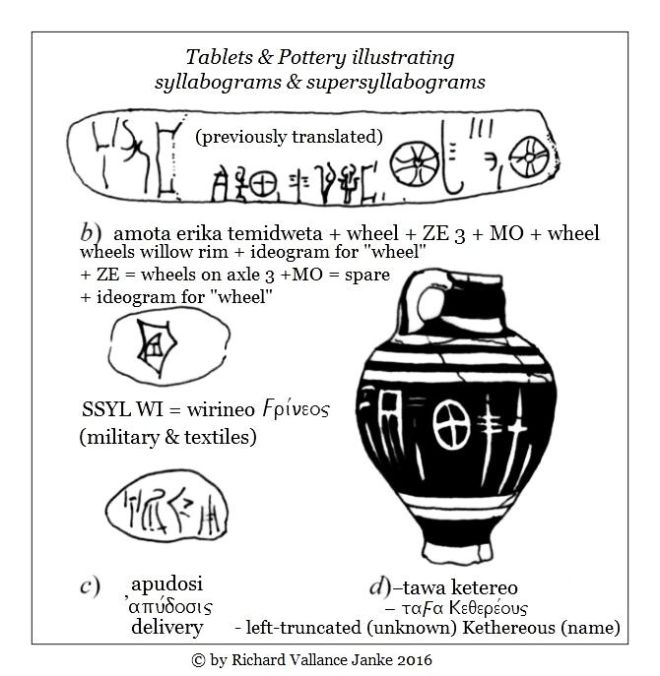 with the text on one Linear B tablet from Knossos (top), which we have previously translated, the second (left) on a Linear B fragment, the third (bottom left) with the Linear B word, “apudosi” = delivery on a fragment, and the fourth (right), being a vase with Linear B on it. Since the Linear B syllabograms -tawa– are left-truncated, we cannot guess at what the word is for which they are the last two syllabograms or syllables. The second word on this vase is clearly the name of the artisan who manufactured it: Kethereous.