Like many other Linear A tablets, HT 114 (Haghia Triada) does not appear to be inscribed only in the Minoan language. The proto-Greek or, more accurately, the Mycenaean word, kirita2 (kiritai), which means “barley” and which is almost exactly equivalent to Linear B, kirita, meaning the very same thing, appears on the very first line of this tablet. The only difference is that the Linear A word, kiritai, is plural, whereas the Linear B, kirita, is singular, as we can see here: 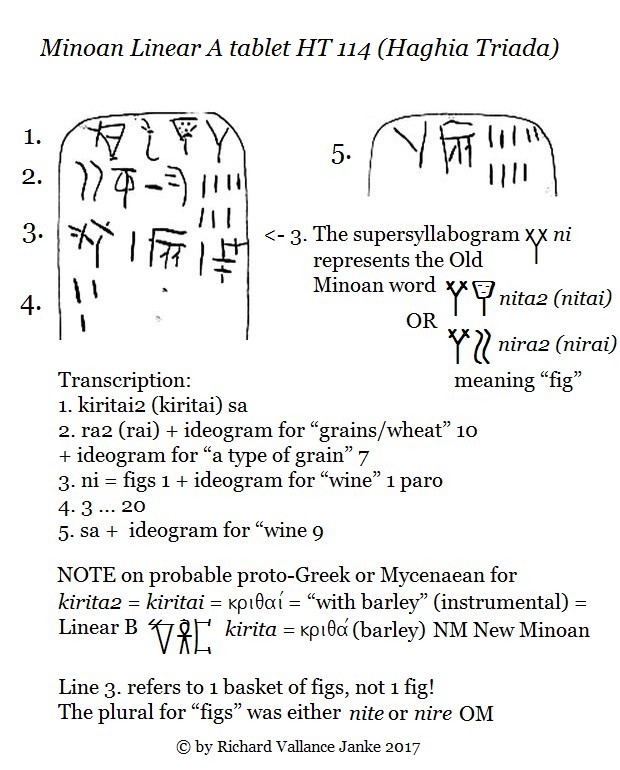 While the rest of HT 114 is inscribed in Minoan, the appearance of this one Mycenaean word gives pause. Was Linear A the syllabary of proto-Greek or of Mycenaean Greek just before the advent of the new official syllabary, Linear B? The fact is that it was not. However, this does not mean that there was not proto-Greek or Mycenaean vocabulary on Linear A tablets. How can this be, when the language itself is not proto-Greek?

The phenomenon of the superimposition of a superstratum of vocabulary from a source language (Mycenaean in the case of Linear A) onto a target language (Minoan), is historically not unique to the Minoan language. A strikingly similar event occurred in English with the conquest of England by William the Conqueror in 1066 AD. Before that date, the only English was Anglo-Saxon. This is what is called Old English. But after conquest of England in 1066 AD, over 10,000 Norman French words streamed into the language between 1100 and 1450 AD, altering the landscape of English vocabulary almost beyond recognition. In fact, believe it or not, only 26 % of English vocabulary is Germanic versus 29 % is French, 29 % Latin and 6 % Greek. So the latter 3 languages, amounting to 64 % of the entire English lexicon, have completely overshadowed the Old English (Anglo-Saxon) Germanic vocabulary, as illustrated in this Figure:

This phenomenon is unique to English alone among all of the Germanic languages. While the grammar and syntax of English is Germanic, the great majority of its vocabulary is not. A strikingly similar event appears to have occurred when the Mycenaeans conquered Knossos, is dependencies and Crete ca. 1500 – 1450 BCE. Just as the Norman French superstratum has imposed itself on Old English, giving rise to Middle and Modern English, Mycenaean Greek operated in much the same fashion when it superimposed itself on Old Minoan, leading to New Minoan vocabulary, which is proto-Greek or Mycenaean. I have already isolated no fewer than 150 proto-Greek or Mycenaean words out of 510 intact words (by my own arbitrary count) in the Linear A lexicon. Again, while the Minoan language itself is not proto-Greek in its grammar and syntax, but is of another, to date still unknown, origin, a large portion of its vocabulary is not Old Minoan, but instead proto-Greek or Mycenaean, as I shall demonstrate in no uncertain terms in my decipherments of numerous Linear A tablets to follow this one. One striking feature of New Minoan is this: the percentage of proto-Greek or Mycenaean vocabulary in Linear B comes to 29 %, precisely the same level as Norman French in English. Although this is sheer co-incidence, it is quite intriguing.