Conjugations in the present active and middle of 9 common Greek verbs in Linear B:

Introduction: we now take the Theory of Progressive Linear B one step further, by illustrating its eminently successful application to the Greek Middle Voice in the present tense.  This is the one and only conjugation in Linear B which remains fully intact, and as such it fundamentally serves  to validate the Theory of Progressive Linear B Grammar, and it does so nicely, thank you very much.  For those of you who are not familiar with ancient Greek, I suggest once again that it is probably better for your sanity not to read this post, as it discusses the minutiae of one of the most convoluted grammatical concepts in Greek, ancient or modern, the function of the Middle Voice, which unless you already know Greek, is so maddeningly difficult to get a handle on that is probably not worth your trouble.  But I know that, regardless of what I say, some of you more adventurous “curious cats” will storm right ahead anyway… and who can blame you for that? If you do manage a basic understanding of the notion of the Middle Voice, all the more power to you.  In fact, leave me a comment bragging about your marvelous feat.  It took me three months (!) to really get a  grip on the Middle Voice when I first learned Greek.  Finally, one day the light came on, I shouted the proverbial “EUREKA!”, and ever since then there’s been no looking back !  Anyway, here is the table of conjugations of the present tense of 9 of the most common verbs in Mycenaean Linear B, one of which just so happens to be in the Middle Voice, either a disaster or a blessing, depending.  So why not give it yourself a shot? Here we go! CLICK to ENLARGE:

I offer up another of my typically copious and convoluted “notes” (much like the labyrinth of Knossos) for your entertainment, enlightenment or nervous breakdown, as the case may be.  A bit of humour never hurt anyone, eh?  I know it practically drove me mad to compile them in the first place.  So here we go again! CLICK to ENLARGE: 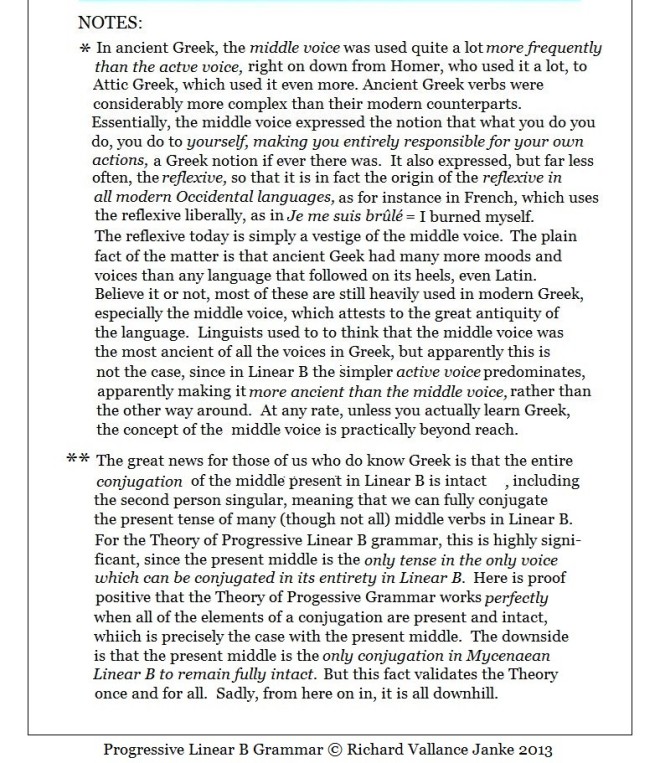