Practical Application of Cross-Correlation in Mycenaean Linear B to the present tense of the verbs AKEE (to lead) APIKEE (to contain) DOSEE (to give) EKEE (to have) KAUEE (to burn) & PEREE (to bring):

NOTE: you must read these tables in 2 parts A: & B: if you are to fully grasp the implementation and practical application of the Principle of Cross-Correlation to the reconstruction of the Present Tense of any verb whatsoever in Mycenaean Linear B, whether attested [A] or derived [D], with the understanding that I shall never attempt, in so far as it is humanly and rationally possible, to reconstruct any putative verbs which in fact have no place in the Theory of Progressive Mycenaean Linear B Grammar.  I will eventually explain how and why I must severely restrict myself to vocabulary that almost certainly existed in Mycenaean Linear B, even if some of it has been lost, not having been found on any extant tablets.  A case in point is the verb KATAKAUO, a perfectly legitimate  unattested derivative [D] of  the attested verb KAU [A], which does appear on extant tablets.  I feel quite safe in concluding that the Mycenaeans and Minoans must have used the verb KATAKAUO, since Knossos was burnt to the ground on more than one occasion anywhere from the Neopalatial (ca. 1700-1425 BCE)  to the Late Minoan III- LM IIIA2 Periods  (ca. 1450-1340 BCE), when Linear B was the exclusive language of scribes at all Mycenaean sites, especially Knossos, Pylos and Chania, where most of the Linear B tablets have been unearthed… not to mention other sites where tablets have been found… which I won’t mention right now (just to put you off?… hey, why not, just for a laugh). 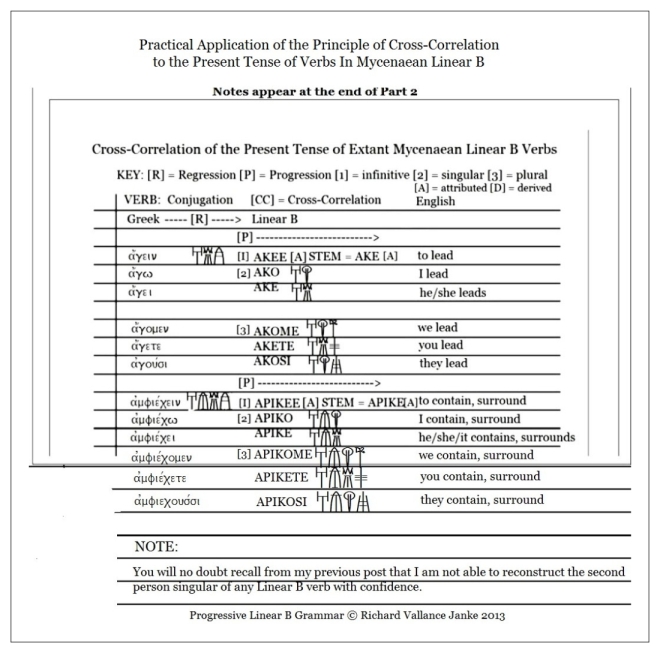